You know those random fill-in-the-blank questionnaires / lists that go around Facebook from time to time? Back in like 2008/2009 there was one that was “25 Random Things About Me.” They were written in the “Notes” feature of our Facebook “Wall”.  If you wrote one back them – it probably still exists in the Notes feature of your account.

Anyway. For some reason it’s crossed my mind a few times recently, so I dug it out of the deep of Facebook like a time capsule. 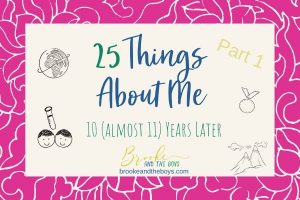 My first impression of the list I wrote back then was “Hmmm. Funny to read things I wrote about ten, nearly eleven, years ago.” It was a lifetime ago. And it was yesterday.

Does everything still ring true? Do I still think and feel and hope and dream for the same things?

I took a closer look

I decided to take a closer look at my random things from back then and see if any updates needed to be made.

The list below is the first 11 of my original 25 Things list (which you’ll see ended up being 30 things. I was a rebel like that.) When I started updating it, it got kind of long, so I decided to split it into two parts. Why 11? No reason. Just where I split it.

I’ve added a note below each to give it an update.

This post may contain affiliate links. If you click and buy, I’ll may receive a small commission. You can read my full disclosure here.

25 Random Things About Me – Revisited

The rules: Once tagged, write a note with 25 random things, facts, habits, or goals about you. At the end, tag 25 people to do that, plus tag the person who tagged you.

(To do this, go to “notes” under tabs on your profile page, paste these instructions in the body of the note, type your 25 random things, then click publish, then tag 25 people (in the right hand corner of the app). 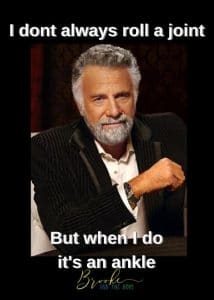 Update:  I don’t really feel like this is an issue the way it used to be – although it’s certainly not out of the realm of possibility at any given moment. (while standing still) I sprained my right ankle so severely in college that it basically tore all the tendons and ligaments that support it. So now, it’s just a loosey-goosey ankle and rolls with a mind of its own.

I suppose it helps that we don’t live where it’s cold anymore. The falling from sliding on black ice is not as likely in Florida. And I rarely wear heals these days – I like my Rothy’s and Jack Rogers when I’m not wearing slaps or sneakers. Flat Boots in the Florida “winter” are really all I need to round out the shoes – so these days – fortunately, falling has become much less frequent than it used to be!

Original:  I HATE, HATE, HATE it when 1) someone calls me “Brooks” and 2) when I send an email with my name a) in the actual email address, b) in a closing, such as: “Thanks for your help, Brooke”, and c) my company signature with my full name included, and people still continue to respond and spell my name “Brook”. Don’t have to be all that observant to spell someone’s name right people. Make a smidge of effort, wouldya?

Update:  “HATE” is a pretty strong word for me these days. But generally this one is still true.

Original:  I can out-argue and out-logic just about anyone, anytime should the passion appear. I’m told it was great fun for my mom when I was 4.  Not.

Update:  Still true, except both of the boys have skills in this area. My mom gets tremendous joy in seeing Reid give me a run for my money. 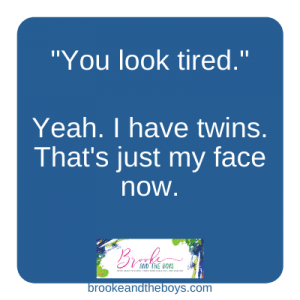 Update:  I’m not sure my audio memory is as sharp as it was when I wrote this ten years ago. In my defense, I have ten more years’ worth of info in it. I’m probably just better at filtering what is actually important. Or I just care about different things now. Or I’m just mom-tired.

Original:  I spend more money on hair-related things than anyone should, and not the stuff in the drugstore. It is often solely based on the smell of the product. I should own stock in Kerastase. 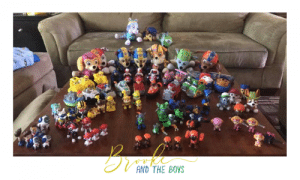 Update:  No longer true. Traded in my Kerastase a few years ago for ALL. THE. PAW. PATROL. (While this picture is blurry – I had to include it just to illustrate this point. These are just the little figures and stuffies we had – not including the train tracks and books and magna doodles and car rugs and Paw Patrollers and other vehicles….and episodes on  What a franchise.)

Original:  I want and fully expect to achieve a stamp in my passport from every continent. Including Antarctica. Yes, there is a stamp. I’ve got 3 continents down. 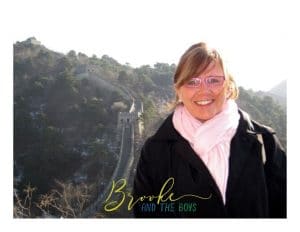 Update:  Definitely still on the bucket list!  I’ve added a new continent stamp since this was written in January 2009. In November of that year I visited my cousin and her husband, who were living in Shanghai, China at the time. I’m not sure which is next, but I feel like it may be Australia to visit a cousin who found us through the Ancestry.com DNA! I have to write that story. It is SO amazing!. Anyway. Number 6 is still a go!

Original:  I wish I’d already found my emergency contact and were married to him. If that doesn’t happen, I am learning to be okay with it. And clocks and all, I still hope for my own children and am open to banks/artificial means. I think my clock started late because I have so much to see and do – and because both of my grandmothers had healthy children at age 40 – and that was 45/50 years ago! 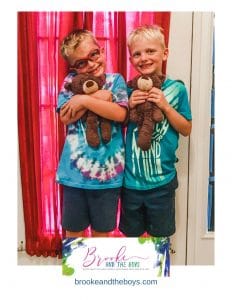 But, since that didn’t happened, I actually DID go the route of “banks/artificial means” to have kids. Although it’s not how I imagined it, I’m eternally grateful I was open to it, and for the science and technology that allowed me to literally choose both egg and sperm donors – based on the criteria best for me – to create my children. And to actually have them myself. I mean – how cool is that?! Read about my transfer day here!

Even with my mom’s help and family nearby, it’s often been H.A.R.D. to the M.A.X. to be on my own. It would have been nice to have had a partner to share it with.

But. If I’d done it any other way, I would not have these exact, precious, extraordinary little people. I’ll take them how I got them every day. Oh I still hold out hope I’ll find my person – except now he’ll have to be our person. And he’ll have a couple of tougher cookies than me to win over!

Original:  I have a very strong and passionate sense of right and wrong and do not take it well when I feel someone is being wronged. But I have never had a strong sense of faith. I wish I had the faith of many people I know. While I was raised Episcopalian and do like to go to church and love the pageantry and artifacts of the Episcopal service, I believe I’m probably Buddhist at heart. 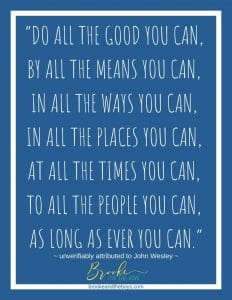 Update:  Still true. The boys challenge me in this area quite a bit with the questions they ask about God and Heaven. Right now I’d say I’m in a period of growth in this area, in large part thanks to having to answer questions from the boys, especially as they are now in a private Christian school.

What I’m finding, I believe, is that my struggle seems to be more about “religion” and that God is talked about as if God was a human. So much about the stories of religions have never made sense to me. The critical thinker in me has always tried to piece it together. And I “know” that is where FAITH comes in. But therein lies the dilemma.

This is obviously a sensitive topic and maybe I’ll put some more thoughts on it here another time.  For now I just want to teach the boys that the most important things to remember are to love everyone. Be kind. Do good in the world.

Original:  I’ve always lived pretty much at sea level and never been a hiker or climber or camper. Yet in September, 2007 I attempted to climb the Machame Route on Mt. Kilimanjaro in Tanzania. Although I made it 7 days on the mountain and climbed to an estimated 18,000 feet, I did not summit the 19,340 ft. This still pisses me off. Because of this, I believe the climb is in my future again. And again until I do. And it has to be the same route. After that, it’s likely I won’t climb any other mountains ever again. 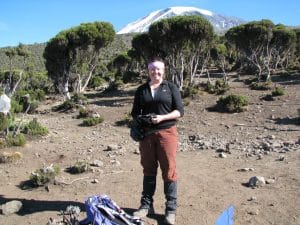 Still true that it pisses me off I didn’t summit (and that I didn’t take the Diamox altitude medicine I had in my backpack to assist that).

But NOT still true that I feel like it’s in my future again. At some point in the past ten years, I guess really since I had the boys, I no longer feel like I need to conquer this. If I think about it I can certainly conjure up the feeling of failure that I felt for not completing it (I wrote about that here),  but it’s no longer high on my list to do again. There are just so many other things to see and do, I suppose.

But man, I wish I’d gotten to the top.

Original:  I have always wanted a tattoo – and I still do. Fortunately I no longer want the ‘Pooh and Piglet holding hands’ tat that I thought for years I wanted.

I’ve finally almost outgrown the fear of disappointing my mom by permanently inking my skin.

Original:  In the past 2 ½ years, I started running and have run in about 20 road races including the Gate River Run 15K twice and a ½ marathon in Tybee Island, GA. I began training for my first marathon in October 2008, to run in this year’s [2009] Breast Cancer Marathon. However, due to item #1 on this list, that became impossible in November when I wrecked my “good” ankle and achilles. It had nothing to do with Maker’s Mark. Really it didn’t. Really.

Update:  The year this was written (2009) I ran a full marathon – the Marine Corps Marathon in Washington D.C. 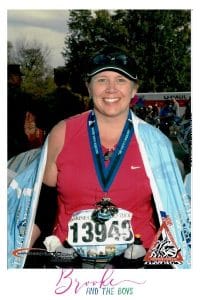 I haven’t run a road race since that one, mostly because shortly after that race, I started down the IVF path. In 2018 I wanted to start running again and registered for the February 2019 Breast Cancer Half Marathon (same one associated with the marathon I originally planned to train for in 2008.)

Unfortunately shortly after I started training I was injured and have been out of commission for running ever since. I don’t know if I’ll make it back to the road race scene, but I am super happy I got a full marathon under my belt. It took me 6 1/2 hours to run it – but I crossed the finished line upright and a United States Marine hung this medal around my neck…. 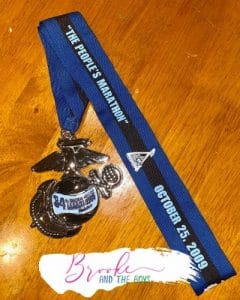 I can tell you there’s really nothing like a US Marine telling YOU (ME!) “Ooh Rah!” as you (ME!) run past them. It was a very special experience for many reasons, and that was a pretty big highlight.

Sooooo…that concludes Part One of my 25 Things About Me – 10 years later – article. I’ll post the remaining 9 (which is actually 14) in a couple of days.

Skip the Training Wheels & GET the Balance Bike!

8 Ideas to Teach Kids the Love of Reading