You are here: Home / Family / Kids / Are My Kids Safe at School?

Updated and reposted May 24, 2022 after the Uvalde, TX mass school shooting killed at least 20 children and 2 adults, and injured many more.

I wrote the article below 4 years and 3 months ago. Between 2018 and this date in May, 2022 there have been at least, AT LEAST, NINETY-NINE school shootings. That’s approximately two every month for the past 4 1/4 years.

If you take away three months for standard school breaks each year, that is approximately 2.5 for each month school is in session.

This doesn’t include all the other mass shootings that have occurred in the same time frame at grocery stores, churches, places of business, etc.

No, that number totals more than 2,055 according to the tracking on gunviolencearchives.org. In just over four years.

Don’t come at me about mental health. I have a long, personal history with that topic and while mental health is a necessary thing to address, it is not at all related to THIS topic.

Don’t come at me about your rights, your freedom, your liberty, and the 2nd amendment. It’s not 1791. Read the article below about that.

Don’t come at me about politics. If you’re inclined to, then you are the one making it about politics. For me, it’s about my elementary school-aged twin boys. The loves of MY life.

If you are more worried about your “rights” to get your hands unchecked on a weapon capable of these tragedies than standing up for the rights of all children to be safe at school, all people to be safe at church, work, concerts, and on subways – you are complicit.

Which of your own kids or family are you willing to sacrifice?

“Thoughts and prayers” mean nothing if you are willing to allow this to continue to happen.

Yesterday morning, like millions of other parents, I watched my five-year-old twin little boys climb out of the car in car line, shrug on their giant backpacks and walk into their school. No doubt, the question of the day was “Are my kids safe at school?” 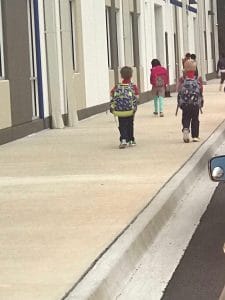 Is it safe to leave them here?

I watched my babies, my heartbeats, who have no awareness of the horrific world we live in these days, walk into a building I have always felt was safe, but now was no longer confident was the case.

As I slowly, reluctantly, drove away I said out the window as I passed them, “I love you, boys!  Have a great day!”  They both ignored me, as usual.

That was yesterday morning. The feeling of a pit in my stomach is still there, and I want to go get them. Right. Now.

What is our school doing?

This morning I received an email from our principal about the steps he and the staff are taking to ensure our children’s safety. It was reassuring to know they are doing everything they possibly can to make sure the horror of a school shooting doesn’t happen there. But the reality is that although it is important and can minimize the effects, all the training and drills in the world are no match for someone intent on causing the kind of horror a mass school shooting causes.

As people post their comments on social media, it seems fingers point at two things: mental health and guns – as if it is an issue of one over the other, depending on one’s political stance. I’m not interested in debating anyone about personal beliefs on our rights or any of the politics of the issue. We will never convince each other of the other’s position because we don’t and can’t have the same perspectives. We have had different upbringings, different experiences, different lives and different hearts.

Besides, all I can really think about is the fear.  My fear of sending my kids to school. The fears of my boys’ teachers and the other teachers and administrators at their school and all schools across the country. The fears of all my teacher friends going to teach our future every day.  The fear of all of the kids aware of these mass shootings every time they happen.

Last year I went to a concert where an unexpected emergency alarm sounded mid-song. It was eleven days after the Las Vegas concert massacre and I bolted from that arena the moment it was clear it was not part of the show. You can read about my experience HERE.  In that post, there is a link to a video of what I experienced. Even knowing now that it was a false fire alarm, I would leave every time in that situation. The fear I felt that night was real and comes back instantly when I watch that 30-second video.

Now imagine being a child with an active shooter scenario at school – the safest of places your parents send you off to every day. Imagine it being your own child. Simply unfathomable.

When it hits close to home

As I started putting my thoughts down on paper yesterday, my cell phone began dinging with alerts. As if being in the same state wasn’t close enough, three local schools were on Code Red Lockdown due to a shooting of a teen outside an elementary school. Bullets hit a window of the offices at the school and the shooter was still at large. These schools are less than ten miles from my house. It was all I could do not to leave to get the boys right then.

While I know we can’t shelter our kids from the world, I also know I don’t want them to grow up like this.  Why do they have to? Oh, I know there are dangers everywhere. I know someone will say that America is the greatest country in the world to live, and someone else will say we need stricter gun laws and to outlaw assault weapons, and someone else will counter with the need for more mental health assistance for people instead – as if the issues were exclusive of each other.

I hear the arguments about all of the other ways that one is more likely to get hurt or killed. I get it. But those arguments don’t negate the issue of school and other mass shootings occurring in our country at a much more alarming rate than anywhere else. They don’t negate the findings of a 2016 study by the World Health Organization published in the American Journal of Medicine that among twenty-two high-income countries, 91% of children younger than 15 killed by firearms lived in the United States. NINETY-ONE PERCENT.

So to all the arguments and all the sides – all I can say is, “Yes.”

Yes to all of it

Yes. In so many ways, America is the greatest country in the world to live. But in some ways, it really isn’t. This is definitely at the top of my list of “isn’ts”. (Note: If you are one to pounce here on my patriotism and tell me to move to <insert whatever country you deem “worse” here>, please save it and move on.)

Based on the little I’ve read about the most recent school shooter in Parkland, FL, there was quite a bit of concern about him. He was expelled from school, had been in mental health counseling at some point and had stopped attending. The FBI had been notified about some of his behavior and social media posts and didn’t follow their own procedures to follow up on it (Wall Street Journal article). There is certainly much more to come out about that failure, but the point is, despite all the warnings, he was missed.

He slipped through the cracks

He was allowed to legally purchase an assault rifle and he gunned down a bunch of kids and teachers in a school.

If there was no legal reason to hold him in a jail or mental health facility prior to that, how should he have been tracked?  A database of some sort would be a good start.  At a minimum, it could have flagged him as attempting to purchase a firearm and to prevent purchase. But we all know that alone wouldn’t prevent him from getting the weapon he wanted.

Can we lock people away solely because of a photo they post on their social media account that someone “thinks” shows the potential for violence against others? If someone posts a picture of a frog dissection done in a Biology class, who is to say they shouldn’t be flagged? What about a picture of someone hunting and killing a deer? No doubt someone against hunting would report that, despite the fact that the hunter may be feeding his family that way.

And yes. We sure do need to address the gun situation in this country. I’m generally a “live and let live” type. Live how you want to live as long as you don’t cause harm to others. Guns aren’t my thing, but I know plenty of people whose thing they are. To each their own.

But how can anyone argue a need for an assault rifle or a bump stock to increase firing speed?

The Second Amendment is not at stake here

It is not against the 2nd Amendment to require longer mandatory waiting periods, full background checks at the purchaser’s expense, better communications between gun dealers, state and federal agencies, mental health reporting, and other restrictions or due diligence.

The 2nd Amendment was written at a time when the arms it refers to were typically muskets with a one-round magazine capacity. It required manually reloading every shot with powder and ball. My research consensus seems to be that it could fire three rounds per minute by a skilled shooter – not fifty rounds per minute of today’s weapons used for nefarious purposes.

We must adapt. When will we adapt?

Modifying Amendments written more than 200 years ago in a different society is not new. Article V of our Constitution outlines the process (Click Here to read Article V).  Our Constitution has been amended seventeen times since the first ten Amendments (the Bill of Rights).  These changes include abolishing slavery (13th) and to allow all citizens the right to vote, regardless of race (15th) and gender (19th). In fact, Amendments can be amended as well. The 21st Amendment repealed the 18th Amendment banning alcohol.

So modifying the 2nd Amendment to match the society and times in which we live is appropriate. And it is long overdue.

Until both sides agree that their own side is as much an issue to address as the other, I don’t see how anything will change.

I have twins in Kindergarten – we have a lot of school years remaining. If I could afford to homeschool them, I would. In the meantime, I, along with countless others, will live with the fear that the next time it could be our own community and our own children’s school.

Unless drastic changes are made, there is simply nothing we can do about it. Thoughts and prayers don’t cut it.

« Definition of a Single Mom
The Mighty Preemie »