You are here: Home / Family / Momming / The Baby Project – My IVF Transfer Day

On today’s date (December 13th) in 2011, I was pacing a hotel room in downtown Portland, Oregon. Pacing and waiting for the clock to hit 1:30 pm while simultaneously trying not to think about the clock. What I had put myself through physically and emotionally for the previous year and a half all came down to this day -The Baby Project I’d been working on had hit the milestone IVF Transfer Day – December 13, 2011.

I lived in New Hampshire at the time and had flown to Oregon the day before. It was my third trip to Portland in six months, but this time was IT.  IT was to hopefully, finally, get at least one five-day embryo good enough to transfer.

The Story is Loooonnnggg

The story of how and why I ended up in Portland that day is lengthy, as these stories often are. Let’s just say that for a year and a half I was poked, prodded, and inspected from all angles, inside and out. In one sitting I had 22 vials of blood taken from my arm. TWENTY-TWO VIALS. (And I didn’t pass out!) I had been evaluated psychologically, and talked to and looked at like I was nuts (probably I am somewhat).

It isn’t an understatement to say I had experienced not just vast disappointment, but a full-on tragedy during this year and a half long experience. I kept my “baby project” mostly to myself, sharing with only a handful of people. I could not hope enough that this time, THIS TIME, THIS transfer day would be THE time.

When 1:30 pm came, I went downstairs to the lobby to get a taxi to take me to my appointment. The taxi driver’s name was Johnny, and he turned out to be an angel in disguise. On the ride to my appointment, I don’t really know what possessed me to tell him what I was going to do, but I did. I wish I could remember exactly what he said to me. Essentially he told me that he knew the procedure would work and that I was obviously destined to be a mother.

I do remember that on the passenger seat beside him was a new book by Chris Matthews called Jack Kennedy: Elusive Hero. I had just seen Chris Matthews talk about his book the week before in New Hampshire at the Portsmouth Music Hall’s Writers on a New England Stage series. And I happened to have purchased the same book and had it autographed by the author. When I mentioned that, Johnny was so excited. I asked him for his address and told him I would mail him the book. I don’t think he believed me, but he gave me his address anyway and told me to please let him know how my procedure had gone. He said he wanted to be an honorary west coast Godfather to my baby!

I felt good when I got out of the taxi. I remember thinking that Johnny had crossed my path on my transfer day because I needed him. So a little relieved, but still a lot nervous, I went into the office to get the embryo transfer party started.

I had been going to an acupuncturist in New Hampshire throughout my IVF journey (shout out to my acu-guy Adam at Family Acupuncture in Portsmouth who kept me sane during it all!). So I arranged for an acupuncturist to meet me at the office for treatment before the procedure.

After the acupuncture treatment, a nurse took me to another dimly lit room. It was sort of like an operating room but I guess really more like a procedure room. The embryologist and my doctor were there.

The embryologist talked to me briefly about the two embryos she chose for me. And then she pointed to a monitor up in the corner of the room.

A picture. This picture. 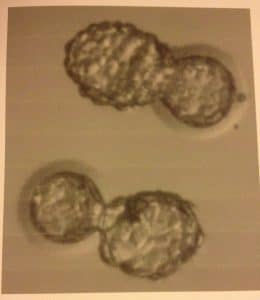 And those five-day blastocysts turned into these little boys (this picture is from 2017): 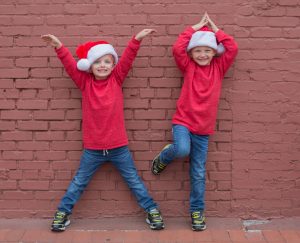 Here’s an updated picture from 2018 (photo credit for both goes to the very talented and fun duo at Logan Rose Photography. If you are in the Northeast Florida area, I highly recommend them! (They travel too!)) 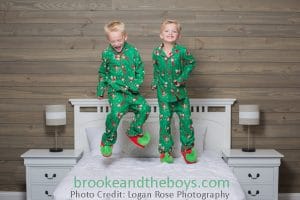 Aaannnnddd…here’s a selfie from December 2019. Love them! 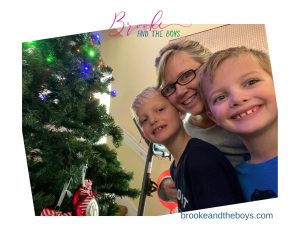 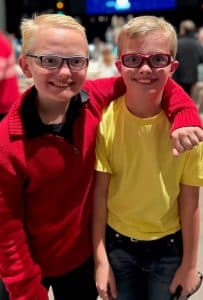 I have now forgotten a lot of the knowledge I had about In Vitro Fertilization (IVF). It’s almost unbelievable when you think about it: donor sperm and donor eggs combined in a lab. Not to mention the absolute wonder of the female body and what it can do!

Human life, in general, is a miracle. But the almost sci-fi aspect of Artificial Reproductive Technology (ART) is mindboggling.

I mean!  YOU GUYS!! I can actually show you a picture of my little boys … BEFORE THEY WERE LITTLE BOYS.

I can show you two microscopic little masses of random cells five days after fertilization, hatching from shells, mere moments before being transferred to my body to grow and become actual PEOPLE!!

(Oh, and I DID mail Johnny the book, and he sent me a lovely Thank You card for it, that I still have. :-))