You are here: Home / Family / Kids / Early Reader or Hyperlexia?

Signs of an early reader appeared when the boys had just turned two. Reid was starting to put some words together. Jake was still grunting at me a lot. When I needed a way to occupy them with some entertainment so I could use my hands for something else (like housework), there were a few video series I would let them watch on TV.

On the short list were the Baby Signing Time series and a series called Your Baby Can Learn (it was Your Baby Can Read at the time.) It appears he was.

He quickly became a signing, reading two-year-old. It was a little crazy.

When I say he could read, I mean he could actually READ. It wasn’t just memorization and sight words. The child could read real words, sound them out, etc. He’d been doing it since his language explosion just after his second birthday.

It started with a fascination with letters.

He carried a wood picture of the alphabet around the house like a lovey. 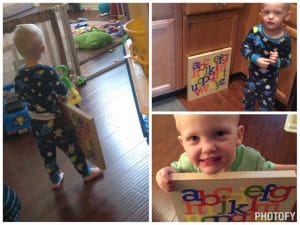 He incessantly sang the ABCs:

So I taught him to sing them backward:

Then I taught him to sing them with the sound of the letter instead of saying the letter (ah, buh, kuh, duh, eh, fff, guh, etc). (I don’t have a video of this one, sadly.)

The First Time He Read

One night, the boys had PJs on with the word “RACING” across the front. Reid was lying on his back on the floor and Jake walked up to him and ran his pointer finger through the air, air-underlining the word, and said “RAKING”. Since at that point I had taught him the “C” makes a “kuh” sound – like a “K”, him pronouncing the word “racing” as “raking” was actually correct for what I’d taught him.

Not long after that, we were in an outdoor courtyard of a local coffee shop. I picked Jake up as we were getting ready to leave and he pointed over my shoulder and said “rain bird”. When I looked where he pointed, there was a sprinkler system box on the wall with the words RAIN BIRD across it.

Another time we were outside a local restaurant called Poe’s and he looked up and read it.  He pronounced it correctly.  Why not “Po-EEs”?  How did he know the E was silent?

You may question his comprehension. I did too.

Except when he read Goodnight Moon and said “goodnight mouse” he would stop, look at the picture, and say “where’s the mouse?”

He read a new book to his teacher at daycare one day around this time. She knew he could read words around the room but was surprised that he had read the whole book to her. It was not a book he’d ever read before, at least to my knowledge. She said with some surprise, “he read the word ‘corduroy’!”

Later when we were home, his speech therapist was here for an evaluation and I told her what the teacher told me. She said to him, “Jake, do you know what corduroy is?” and he replied, “a bear.” That is true. The book he read to the teacher is called Corduroy and is about a bear.

So I believed the comprehension was there.

In this video, he was 2 years, 9 months old. Watch the finger run under the words.

As far as signing, he knew SO MUCH sign language, and he started signing the letters every time he sang his ABCs. (Note, we used to also sometimes sing ABCs to different tunes – in this case, it was the tune of London Bridge :-)):

A few weeks before I originally wrote this in May 2015, a couple of interesting signing things happened:

2.  My dad was at our house and I asked Jake how to spell “Papa”. He shook his head, indicating he didn’t want to. So I asked him what the sign for Papa was (an open hand, thumb touching the forehead (which alone is the sign for “daddy”, and then bouncing the hand forward twice). Instead of signing “Papa”, he finger spelled it – P.A.P.A. So – he could spell it, he just didn’t want to say it that day.

We had some Chunky Wood Puzzles of the alphabet. He carried the letters around everywhere, slept with them, and chewed on them. He would arrange and rearrange the letters, announcing the words he was making each time. If you tried to touch the letters he shouted “DON’T TOUCH MY LETTERS!” 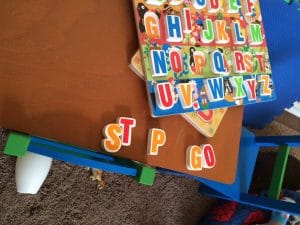 Hyperlexia is commonly associated with Autism. There were times I thought there was a possibility Jake could be somewhere on the Autism spectrum. Although, really everyone can display some symptoms of any given disorder and not necessarily have that disorder.

It could also have been that he was two years and 10 months old, was born 8 weeks early, and was maybe a little shy with people he didn’t know. You know…because he was TWO.

Either way – the kid loved his alphabet. And even though the song says at the end “Next time won’t you sing with me?” – you better ask him first. He usually really doesn’t want you to sing with him.

More from Brooke and the Boys:

Children’s Books to Give as Gifts

Teaching Kids the Love of Reading