Today is Day FIVE of my December Self-Challenge to write a blog post every day this month.  I am trying to create the habit of writing every day. I don’t really have a plan for it other than I’d like to complete many of the posts I’ve half or mostly written already.

Tonight I’m writing about something different than I’d been thinking all day I would write about. That’s because tonight, right before bed, Jake lost his second tooth in less than two weeks. Now he is missing his two front teeth! Perfect timing for Christmas!

But, shocker, I got sidetracked making sure Yestra (that’s our Tooth Fairy’s name) had what she needed to make a stop at our house tonight.

And since I’m trying to get this thing posted before midnight tonight, expect typos. 🙂 (For the record, it is 11:15 pm right now).

Losing the first one 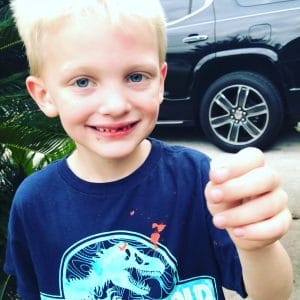 He came tearing out of the house as I was putting up Christmas lights outside, blood running down his chin, all excited. It was adorable!

Losing the second one

Pretty much the next day, the other top front tooth started letting go and inching toward the center.

This picture was over the weekend, but you can sort of see it was moving toward the middle. 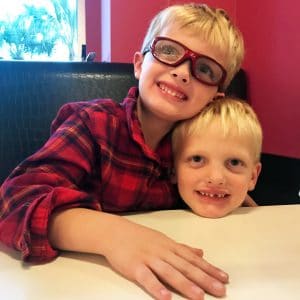 He looked pretty funny with one tooth in the middle, especially the last day or two when it was crooked so it looked like a single fang. (I just laughed out loud – LOL!)

Anyway, it was hanging on by I don’t even know what this morning. I told him I would be very surprised if it stayed in all day.

I was surprised. It did.

But he went to put his PJs on, and a minute later came running out – tooth in hand! (he wouldn’t let me take a picture. :-()

Long story short – I have never gotten the boys Tooth Fairy Pillows because I have Googled and Pinterested and have not been able to find a “boy” one I like. So we use ziplock baggies.

I know I know.

At one point I bought some material at Walmart and was going to make some pillows.

But I haven’t done it.

Then two teeth ago, Yestra forgot to come for the tooth. She said she didn’t forget and that she was just swamped, but I suspect she really forgot.

Jake decided to leave his tooth (in the baggie) on his nightside table so it would be easier for her to find. Sweet boy.

I had already started thinking that maybe Yestra could bring the boys Tooth Fairy Boxes to use, instead of pillows or anything to go under the pillow that would require her to search. 🙂

With the second tooth situation, Yestra realized she needed to get to making that box or forever get used to the idea that her kids’ memories will be putting their tooth in a snack baggie for the Tooth Fairy.

So she started working on it – but paint takes a while to dry and she was hoping the second tooth would hold out one more day….but it didn’t.

What she left tonight

So tonight she decided she’d leave one of her cards, and she’s thinking of asking Jasper (our Elf) to bring the Tooth Fairy boxes one night.

I’ll be sure to post a picture about the boxes she leaves when she gets them completed because I think they are going to be super cute! 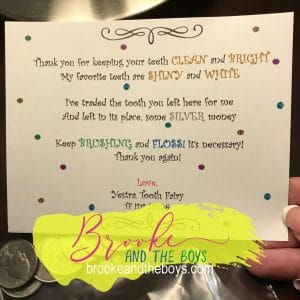 Oh – he flat REFUSED to let me take his picture without both teeth. But hopefully, I’ll get one soon and can put it up!

P.S. – this is my FAVORITE version of All I Want For Christmas is My Two Front Teeth (this one is Nat King Cole <3)