You are here: Home / Home Life / DIY / Cricut / Snowman Bulletin Board: Thanks Cricut!

One of the boy’s teachers asked for a volunteer to update her bulletin board with a Winter theme. After scoping out some ideas on Pinterest, I volunteered to change it out. I decided to go with a Snowman Bulletin Board, sort of a combination of several I saw on Pinterest. It turned out pretty adorable! 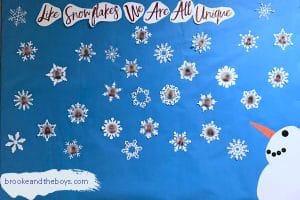 This project was pretty darn easy and quick with my Cricut Explore. I love this machine!

Pictures of the Kids

First, I had the teacher snap pictures of the kids’ heads on her phone. She shared them with me via an iCloud album. I saved them and sent them to myself so I could work with them on the computer.

I am a Microsoft Powerpoint fan – a holdover from my consulting days – and use it for things it really isn’t intended to be used for.

So I imported all of the pictures into a Powerpoint slide and cropped them into a circle just around their heads. I made them all 2×2 inches and then added a cranberry colored border around them. Easy peasy.

I printed them out on white cardstock and hand cut them. Last year I splurged on a color laser printer and have been SO happy to have it. The images and text are very sharp and crisp. I have I guess last year’s model of this one –>

If I could have found my two-inch round paper punch, I would have made the circles with the border two-inches and punched them out instead of hand cutting them.

In the Cricut Design Space™ app I searched for Snowflakes. Because I wanted to say something about every snowflake being unique, I decided I needed to have different snowflakes for every kid.

Most of the snowflakes in the images cost $1.00, and since I needed at least 23 of them, I went ahead and renewed my monthly subscription to the Design Space. I will use it at least through the holidays, and it was only $9.99 – so paid for itself with this project alone.

I downloaded a bunch of different snowflakes – probably 28 or 30 in all just in case some didn’t work as well as others for this kind of display.

How I Sized and Cut the Snowflakes

The bulletin board was seven feet wide by four feet high. I knew I wanted to at least get two snowflakes per page, so I just guessed and made them roughly 5″x5″.

I used regular white cardstock and two Cricut Light Grip mats and just rotated them – while one was cutting, I was weeding the snowflakes from the other. 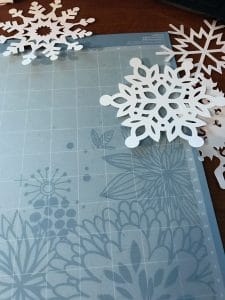 To stick the pictures to the center, I used the very technical method of … Double. Sided. Tape. (the pictures in the middle are covered because these weren’t my kids :-)). 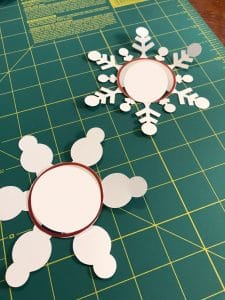 For the saying across the top – I eyeballed it and guessed on the size. I printed one size and that I thought would be too small, so printed it again and just took both.

The font is called Faith and Glory – which I seem to gravitate toward. 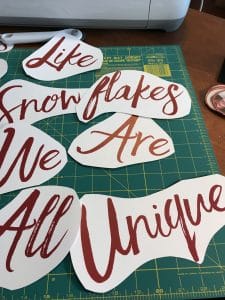 The Snowman was an Afterthought

I hadn’t planned to have a snowman on the board, but at the last minute I grabbed some orange and black cardstock and cut out a carrot nose, the eyes and smile. So I put him down there smiling up at all those special and unique snowflakes. <3

There were some extra snowflakes so I sprinkled them in there too.

Oh – feel free to overlook that the saying isn’t centered. It was all I could do not to photoshop it to make it centered. For those of you who read my perfectionist post, you understand what a big deal this picture is. I will admit that the picture itself was not taken straight on so I did straighten it. LOL 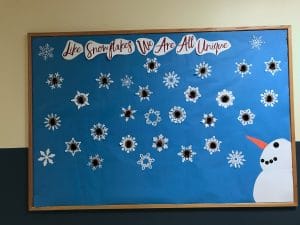 The Cricut cutting and weeding took the most time, only because I printed only two snowflakes per page. But it wasn’t too bad and it really turned out cute! When I was putting it up the class came back from a resource class and they seemed to really like it. They wanted to know where their pictures were!

« Tanked Day Six – But Got Picture of the Toothless Wonder
Three Posts Written, None Posted »