You are here: Home / Family / The Mighty Preemie

If you don’t have a reason to know this, you probably don’t. November is Prematurity Awareness Month, and November 17th is World Prematurity Day. Not surprisingly, I was not aware of this “awareness” month and day until after I found myself sitting in the NICU beside twin babies, born eight weeks early.

All babies are miracles, of course. And the mightiness of premature babies is beyond.

These are my Mighty Preemies

I spent five weeks in the hospital on bedrest with preeclampsia, trying to keep them cooking, before they were born.

We were in between. 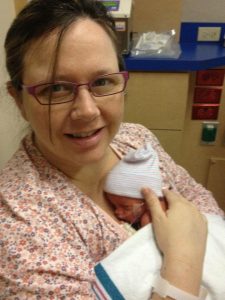 Reid was what they called a “Feeder-Grower”.

He was 3 lbs, 9 oz, and 16 inches long, but had no medical issues other than learning to feed and to get his weight up.

He did have a few episodes of bradycardia, which is an abnormal slowdown of the heart – but that’s not uncommon in preemies.

But really, no issues – just had to get the feeding down. 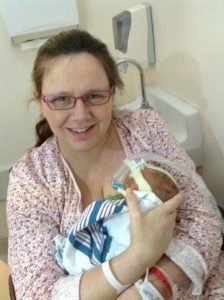 To say that I was not prepared for the NICU experience is a vast understatement.

It would have been tremendously challenging even in the BEST of circumstances leading up to their early birth.

In my case – I moved to Florida from the Northeast at six-months pregnant, and went into the hospital less than two weeks later with preeclampsia. Although preeclampsia typically resolves after delivery of the babies, I was one of the random few that it stuck with after the boys were born – postpartum preeclampsia. Again, a whole different story in itself.

Preemies in the NICU

The point is, having preemies in the NICU is hard.

And being a preemie in the NICU is REALLY hard.

In reality, and obviously in hindsight, the boys and I were SO lucky. But there was some good fight in there too. I appreciate it much more now than I did then, of course. The distance of time is helpful for such appreciations.

As part of a local Moms of Multiples club, I know a lot of preemie babies, including some micro-preemies. I am ASTOUNDED by all of these kids who started out with life-threatening medical issues who are thriving today.

I tell them frequently that they are MIGHTY!  I fought to get them. They fought to live. They have BIG things to offer this world!

November is Prematurity Awareness month. I light my house up purple each November for my preemies. Give an extra fist-bump to the preemies in your life for fighting like hell to get here! 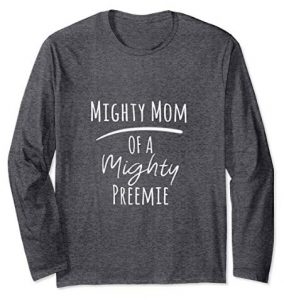 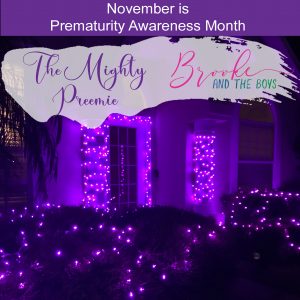 Resources and Information on Prematurity 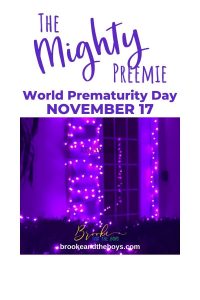 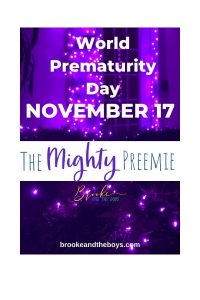 « Are My Kids Safe at School?
Christmas and Holiday Traditions: Part 2 »