You are here: Home / Family / Self / 5 Tips to Control Anxiety in Crowds 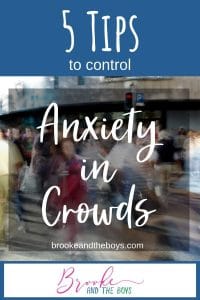 I don’t know if it’s an official thing, but having anxiety in crowds is definitely a thing for me. I wouldn’t go so far as to say I have a “fear” of crowds – also called Enochlophobia, but I’ve never been a fan of large crowds. And I do think it’s worsened as I’ve gotten older. Or maybe it’s just worse because the world’s news has become closer to us and more in our faces. Maybe it’s both. Since I tend to have some low-level anxiety anyway, I usually have to talk myself into going someplace that includes crowds. So I have a few tips to try to control anxiety in crowds.

In 2017 I received tickets to a Florida Georgia Line concert as a gift. Several years ago they played at a backyard high school graduation party in New Hampshire I attended. That was before they were known at all, so I was excited to see them since they had hit the big time.

But as the concert neared, I became sort of indifferent about it. I had a babysitter lined up, but decided to put the tickets on Stub Hub and do something else instead. A friend and I subsequently planned to get together that night, and when we were talking about what to do I mentioned still having the concert tickets. So, at the last minute, we decided to go. 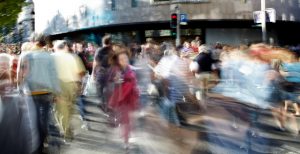 As it turned out, the concert was eleven days after the October 1, 2017, Las Vegas concert massacre (tickets received long before that). After that event, rational or not, I was pretty iffy about going. However, generally not believing in “letting fear win”, and the odds of anything like that happening still being slim, I put it out of my mind.

The opening acts came and went and then Florida Georgia Line came on stage.

It was a fun show. Until it wasn’t.

A few songs into the show, in the middle of the tour title song, Smooth, an alarm sounded throughout the arena saying an emergency had been reported.

You can see a video of it as it happened HERE.

The alarm and the sudden change in the show happened quickly. It all seemed like part of the show at first. But when I saw singer Brian Kelley turn and jog off the stage, followed by Tyler Hubbard and the rest of the band, I bent down, grabbed my purse from under the seat, and said to my friend “we have to leave NOW.”

She had been sitting down at the time, so she didn’t see the band stop singing and head off the stage. The emergency lights in the arena went on and it was a little smoky from the pyrotechnics in the show. A recording played overhead that there was an emergency. Um. No kidding.

It was clearly NOT part of the show.

Everyone was confused, but I was crystal clear

People were confused, but there was no way I was sticking around. I was not getting caught in the chaos of fifteen thousand people trying to frantically exit an arena. Plus, we were parked at the top of the parking garage, so we could get stuck up THERE like sitting ducks. No thank you.

I was SO out of there.

We scooched by the people standing in our row trying to figure out what was going on and were among the first to hit the escalator. As we booked it down, there was a sort of thud noise. We both heard it and it definitely sounded like a gunshot to both of us. It was enough for us to pick up the pace, as security staff and volunteers told us to slow down and stay calm (Oh…ooookay). We burst out the doors, took our shoes off and ran as fast as we could to the garage and up the stairwell. We were out of that garage and on the road in no time flat. 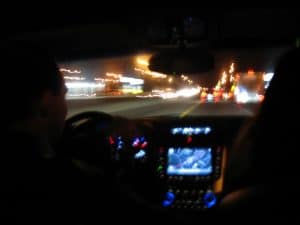 As we drove away my friend called our families and my babysitter just in case they saw something on the news or the internet about it. We still didn’t know what happened and were both pretty freaked out.

Thankfully, it turned out to be a false fire alarm caused by the pyrotechnics of the show. I know quite a few people who were there and who stayed for the rest of the show.

But no question about it, I’d be out of there again. Every. Time.

5 Tips for Controlling Anxiety in Crowds

Since I am not a fan of crowds, but am also not a fan of becoming a total recluse, here are some suggestions to reduce anxiety in crowds when necessary:

Having an idea of an exit plan usually helps to ease my anxiety.

Be aware of people and their behaviors. If someone is behaving in a way that makes you uncomfortable, move away from them and look for security.

If I feel it’s appropriate, I won’t hesitate to notify someone.

Make mental notes about the security staff – what they are wearing, where they are located, if they have stations around, that sort of thing.

If something goes wrong, you’ll know who to look for and where to start if needed.

Be mindful of what you wear – especially with shoes. Don’t wear heels or shoes that can’t be either run in or kicked off easily. The same is true with clothes and bags.

My “purse” is almost always a wristlet or a small backpack-type purse that leaves both hands free.

Remember that BY FAR the odds of anything bad happening are LOW, but be willing to leave.

I have been known to leave events for less apparent reasons than an actual alarm when something just didn’t feel right to me. Trust your gut and if it feels off, it’s off – even if it only feels that way for you.

There have been times when friends have thought I was nuts, but honestly, who cares? I try to balance my anxiety with common sense, obviously, but at the same time, I’d much rather leave someplace than ignore my gut and find out afterward I was in the wrong place at the wrong time.

Definition of a Single Mom

Tips to Control Anxiety in Crowds